1. Look at the given pictures and find which one of the vectors given in the second figure is the relative velocity of A with respect to B. 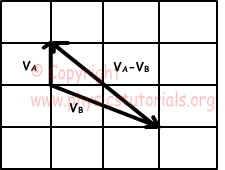 2. Velocity of the river with respect to ground is 2m/s to the east. Width of the river is 80m. One boat starts its motion on this river at point A with a velocity shown in the figure below. Find the time of the motion and horizontal distance between the arrival point and point A. 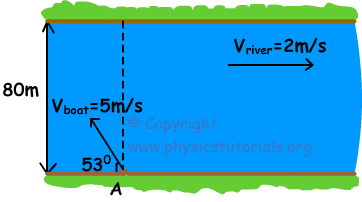 Resultant velocity in horizontal is; VR=VX+Vriver VR=-3+2=-1m/s to the west

Distance taken in horizontal is;

3. A river boat in a river having constant velocity travels 120m distance from point A to B in 20 s and turns back from B to A in 12 s. If the velocity of the river is zero, find the time of this trip. 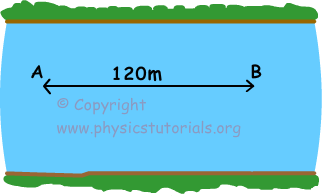 Velocity of boat with respect to ground when it travels from A to B becomes;

Solving equations 1. and 2. we find the velocities of river and boat.

If the velocity of river is zero, boat travels 240m distance in;

4. Five swimmers start swimming from point P. If the swimmer B passes the river and reaches other side of the river at point T, find the exit points of other swimmers from the river. 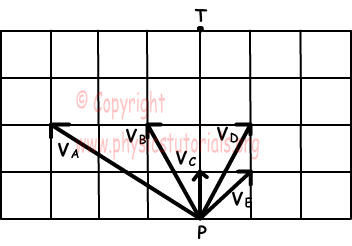 Since swimmer B reaches other side of the river at point T, velocity of swimmer B must be in PT direction. We find velocity of river as 1 unit to the east. Picture given below shows the exit points of other swimmers from river.

5. Two swimmer start to swim at the same time as shown in the picture below. If they meet at point C, find the ratio of their velocities with respect to water. 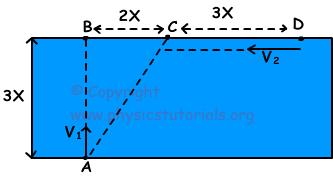