In a circuit given below, electrons coming from the battery transfer some of their energy to the conductor cable. 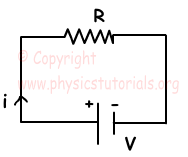 They move and collide to electric energythe particles of conductor and this transferred energy converted into heat energy. In a given unit of time we can find the emitted heat from the conductor as follows;

E=V.i.t Where, E is the heat, V is the potential difference of the battery and t is the time. If we substitute i.R in terms of V then we find following energy equation. 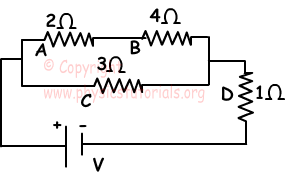 In this circuit, potential differences of the branches in parallel are equal. Currents passing through the branches are inversely proportional to the resistors. With these explanations, if the currents on the resistors A and B is i, then current on resistor C must be 2i.The sum of the currents 2i+i=3i coming from two branches pass through the last resistor D. Energy passing through a conductor in a unit of time is called power. Thus, powers of the resistors are; From the equation P=i².R