Speed and Velocity with Examples

In the last sections we have learned scalar and vector concepts. Beyond the definitions of these concepts we will try to explain speed and velocity terms. As mentioned in last section distance and displacement are different terms. Distance is a scalar quantity and displacement is a vector quantity. In the same way we can categorize speed and velocity. Speed is a scalar quantity with just concerning the magnitude and velocity is a vector quantity that must consider both magnitude and direction.

Speed can be defined as “how fast something moves” or it can be explained more scientifically as “the distance covered in a unit of time”. In daily life we use the first definition and say the faster object has higher speed. Speed does not show us the direction of the motion it just gives the magnitude of what distance taken in a given time. In other words it is a scalar quantity. We use a symbol v to show speed. Let me formulate what we talk above; 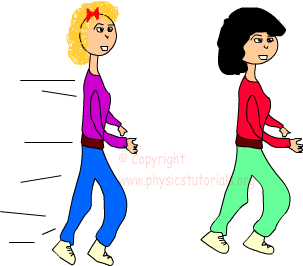 From the above formula we can say that speed is directly proportional to the distance and inversely proportional to the time. I think it’s time to talk a little bit the units of speed. Motor vehicles commonly use kilometer per hour (km/h) as a unit of speed however in short distances we can use meter per second (m/s) as a unit of speed. In my examples and explanations I will use m/s as a unit.

Velocity can be defined as “speed having direction”. As you can understand from the definition velocity is a vector quantity having both magnitude and direction. In daily life we use speed and velocity interchangeably but in physics they have different meanings. We can define velocity as the “rate of change of displacement” whereas “the speed is rate of change of distance”. While we calculate speed we look at the total distance, however, in calculating velocity we must consider the direction and in short we can just look at the change in position not the whole distance traveled. If a man walks 5m to east and then 5m to west speed of that man calculated by dividing total distance traveled which is 10m to the time elapsed, however, velocity calculated by dividing the displacement to the elapsed time, which is 0m divided elapsed time gives us zero. In other words, if the displacement is zero we can not talk about the velocity.

Be careful!! There must be a change in the position of the object to have a velocity. We use ∆ symbol to show the change in something. For example, we can symbolize the change in position as ∆X.

Example: Calculate the speed and velocity of the man moving 45m to the north, and 36m to the south in 27 seconds. 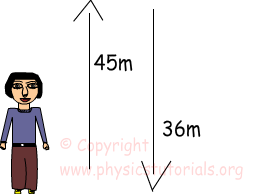 First we should calculate distance traveled and displacement of the man to calculate speed and velocity.

We show with this example that speed and velocity are not the same thing.

A moving object does not have the same speed during its travel. Sometimes it speeds up and sometimes slows down. At a given instant time what we read from the speedometer is instantaneous speed. For example, a car moving with a constant speed travels to another city, it must stop at red lights in the traffic, or it should slow down when unwanted situations occur in the road. At the end of the trip, if we want to learn average speed of the car we divide total distance to total time the trip takes.

Example: A man traveling with his car 150m to the east and than 70m to the west, calculate the average speed and velocity of the car if the travel takes10 seconds.

This is a good example which shows the difference of velocity and speed clearly. We must give the direction with velocity since velocity is a vector quantity however, speed is a scalar quantity and we do not consider direction.