Scientist found that if you rub an ebonite rod into silk you observe that rod pulls the paper pieces. Or in winter when you put off your pullover, your hair will be charged and move. We first examine the structure of atom to understand electricity better. 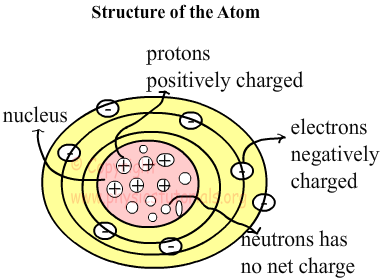 To neutralize positively charged particles, electrons from the surroundings come to this particle until the number of protons and electrons become equal. Do not forget protons cannot move!

Some of the matters have lots of free electrons to move. It is easy for electrons to flow from these materials. Metals are good conductors. Gold, copper, human bodies, acid, base and salt solutions are example of conductors.

These types of materials do not let electrons flow. Bonds of the electrons in the insulators are tighter than the conductors thus, they cannot move easily. Glass, ebonite, plastic, wood, air are some of the examples of insulators.

Example: Charged spheres A, B and C behave like this under the effect of charged rod D and E. If C is positively charged, find the signs of the other spheres and rods.

We learned that opposite charges attract each other and same charges repel each other. Using this explanation we can say that, if the sign of the C is “+” than rod E must be “-” since it attracts C. B must be “+” since E also attract B. Rod D repels the B so, we say that D must have same sign with B “+” , and finally D also repels A, thus A is also “+”.