If the reflecting surface of the mirror is flat then we call this type of mirror as plane mirrors. Light always has regular reflection on plane mirrors. Given picture below shows how we can find the image of a point in plane mirrors. 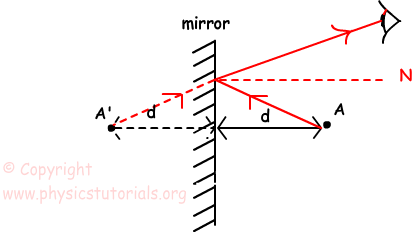 We have to see the rays coming from the object to see it. If the light first hits the mirror and then reflects with the same angle, the extensions of the reflected rays are focused at one point behind the mirror. We see the coming rays as if they are coming from the behind of the mirror. At point A’ image of the point is formed and we call this image virtual image which means not real. The distance of the image to the mirror is equal to the distance of the object to the mirror. If we want to draw the image of an object in plane mirrors we follow the given steps below. First look at picture and then follow the steps one by one. 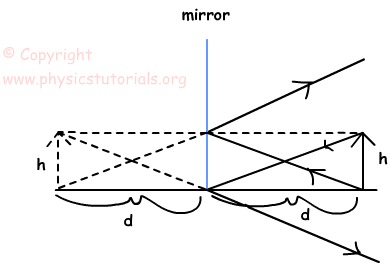 Example: Find the image of the given object. 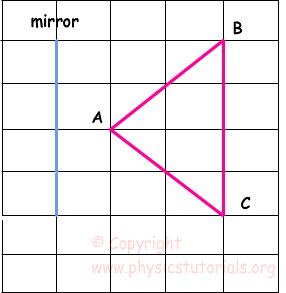 As I said before, image of the object is formed behind the mirror with the same distance of object. We draw first point A’ which is the image of point A, we placed it one unit away from the mirror, then points B’ and C’ are placed with the same way. We connect these 3 points and the image of object becomes formed. The dashed line in the left side of the mirror is our image. 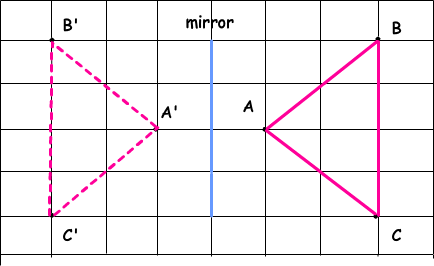 Now, we will examine the situation in which mirror is stationary and object moves with a velocity of V.

If the object moves with a velocity of V then image also moves with same speed but opposite in direction. Pictures given above show the motion of object and image. Second picture is the representation of locations after t seconds.

Example: Find the velocity of the image of the car with respect to ground if both the mirror and car moves with a given velocities.