Linear speed and tangential speed gives the same meaning for circular motion. It can be defined as distance taken in a given time. If the object has one complete revolution then distance traveled becomes; 2πr which is the circumference of the circle object.

Mathematical representation of centripetal acceleration is;

“-“ sign in front of the formula shows the direction with respect to the R position vector. We can rewrite centripetal acceleration in terms of angular velocity and tangential velocity.

For having safe turn on the curve velocity of car must have the value given below which is the top limit. 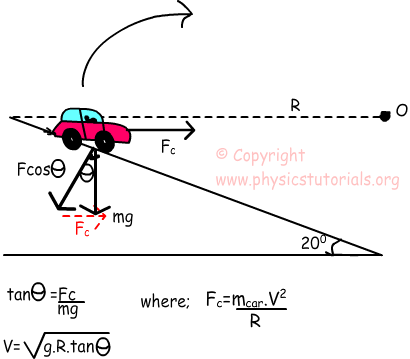 We define torque as the capability of rotating objects around a fixed axis. In other words, it is the multiplication of force and the shortest distance between application point of force and the fixed axis. From the definition, you can also infer that, torque is a vector quantity both having direction and magnitude. . Torque is shown in physics with the symbol “τ”. You can come across torque with other name “moment”. We calculate torque with following formula;