In this law Newton states that, when we apply a force on an object then it also apples force on us in same magnitude but opposite in direction. In general, all actions have reactions in the same magnitude but opposite direction. Suppose that, when you swim you push the water to the backward direction and water also pushes you to the forward direction. We can increase the examples, when birds fly they push the air with their wings and the air also push the bird in the opposite direction, in this way birds can stay in the air and fly. In every where, we can see this couple of forces. Every actions cause reactions. Look at the given pictures, and see the action reaction force couples. 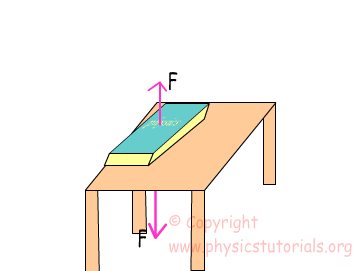 Look at the picture given above. The book applies a force because of its weight, and the table shows a reaction to this action. These force pairs are same in magnitude but as you see their directions are opposite. In the next section we examine this example in detail.