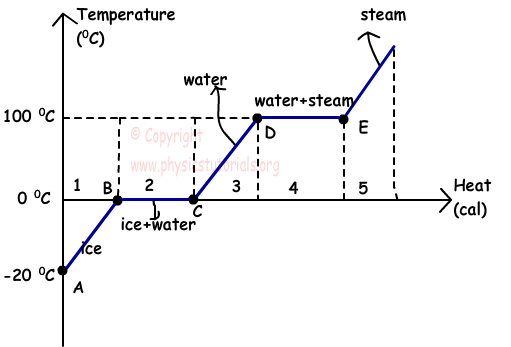 This graph shows the phase diagram of water. At the beginning we have ice at -20 ºC. Ice gain heat in the interval of points A and B, and its temperature becomes 0 ºC that is the melting point of it. We have only ice in the 1st region. As you can see between the points B and C, temperature of the mass does not change, because its state is changing in this interval. Gained heat is spent on t breaking the bonds of molecules. 2nd region includes both water and ice. After melting process completed, in the 3rd region there is only water and temperature of water starts to increase. When the temperature of the water becomes 100 ºC, it starts to boil and evaporation of it speeds up. In region 4 our mass exists in two state, water and steam. After completion of evaporation, all water converted to the steam and in region 5 we have only vapor of water.

The graph given below shows the relation of temperature vs. heat of water vapor that lost heat. 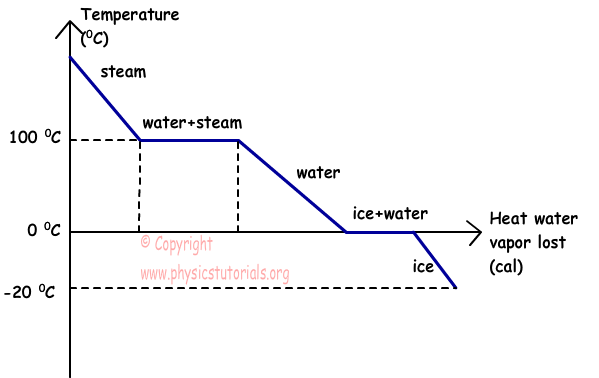 This graph shows the condensation of water vapor which lost heat. As it seen from the graph, steam lost heat and its temperature decreases at 100 ºC, at this temperature it condensate and becomes water, after heat lost it reaches at temperature 0 ºC and starts to freeze. Finally, if it continues to lost heat, their temperature also continues to decrease.