Projectile Motion: We can say that motion in two dimensions or motion under the effect of gravitational force is called projectile motion. We can use the equations of motion given in the kinematics here. We change the acceleration with gravitational acceleration. This motion can analyzed under two title

Horizontal Motion: We find velocity and distance with the formula;

Vertical Motion: We find velocity and distance with the formula;

Newton’s Third Law of Motion: In this law Newton states that, when we apply a force on something then it also apples force on us in same magnitude but opposite in direction.

What change the state of object is called “force”. We mean by saying state, shape or position of the object.

Normal Force: Contact objects exert force to each other because of their weights. These forces are equal in magnitude but opposite in direction. 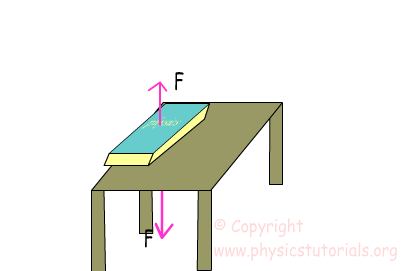 Friction Force: Friction force results from the interactions of surfaces. Irregularities in the structure of the matters causes friction force.Friction force is always opposite to the direction of motion.

We can calculate the friction force by the formula given above;

Where; µ is the coefficient of friction and Fnorm is the normal force acting on the surface.