In previous section we have talked about heat. WE said that, heat flows from the warmer objects to cooler ones. This process continues until the temperatures of the whole system become equal. Heat transfer occurs in three ways, convection, conduction and radiation. Now we look at the definitions and examples of these terms.

Conduction: When you give heat to an object the kinetic energy of the atoms at that point increases and they move more rapidly. 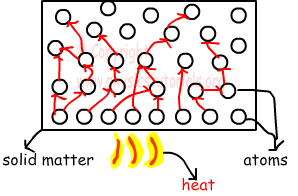 Molecules or atoms collide to each other randomly and during this collision they transfer some part of their energy. With the same way, all energy transferred to the end of the object until it reaches thermal balance. As you can see from the picture, atoms at the bottom of the object first gain energy, their kinetic energies increase, they start to move and vibrate rapidly and collide other atoms and transfer heat. Conduction is commonly seen in solids and a little bit in liquids. In conduction, energy transfer is slow with respect to convection and radiation. Metals are good conductors of heat and electricity. 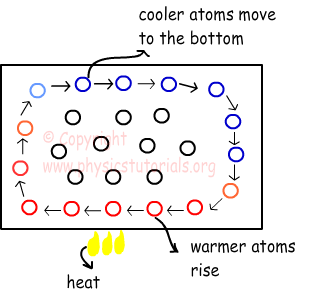 Convection: In liquids and gases, molecular bonds are weak with respect to solids. When you heat liquids or gases, atomsor moleculeswhich gain energy move upward, since their densities decrease with the increasing temperature. All heated atoms and molecules move upward and cooler ones sink to the bottom. This circulation continues until the system reaches thermal balance. This type of heat transfer does not work in solids because molecular bonds are not weak as in the case of fluids. Heat transfer is quick with respect to conduction.

Radiation: It is the final method of heat transfer. Different from conduction and convection, radiation does not need medium or particles 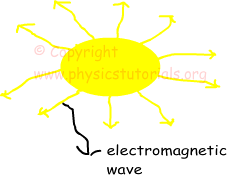 to transfer heat. As it can be understood from the name, it is a type of electromagnetic wave and shows the properties of waves like having speed of light and traveling in a straight line. In addition to, it can travel also in vacuum just like sun lights. Radiation is a good method of transferring heat, in microwave ovens or some warming apparatus radiation is used as a method of heat transfer.